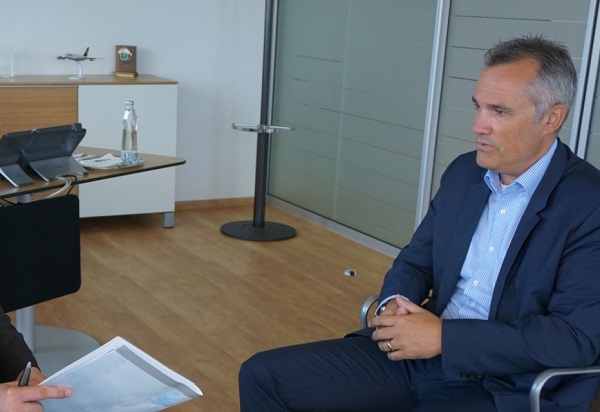 In this new section we will regularly be hearing from key COOPANS representatives, beginning with Thomas Hoffman, COOPANS-Alliance Board Chairman and COO of Austro Control, who talked about the future of COOPANS and his experiences as Chairman.

What, would you say, have been the major developments in COOPANS during your time as Chairman?

One of the major developments during my chairmanship has been to get the new governance model working. As you know we have implemented new group functions and roles. So to make that work was a major challenge during the last one and a half years. Because if you look at the work of the five partners and dedicate specific roles to specific groups on behalf of the others, it still requires a lot of communication and coordination work. But I have to say, all in all it has been very successful and we are now pretty much settled.

Are there plans to expand the Alliance?

That’s a good question, because we are very proud that COOPANS is kind of a role model in European aviation and we receive a lot of appreciation from the airlines, from other ANSPs but also from the European Commission. As you know we were awarded the Single European Sky Award from the Commission in 2016, that was a great achievement and so of course other ANSPs are taking a closer look at COOPANS. There are some parties interested to join, over the next months we will see where this goes. So the answer is yes, it is our goal to grow, to attract more partners and to create a stronger alliance with more buying power towards our suppliers. On the other hand, there is a potential downside if you grow, it gets a little more complex and would require to evolve the governance and the alliance itself. But this is already on the agenda, to ensure that a growing COOPANS is as efficient and flexible as today.

If you take a look around Europe, how does COOPANS fare compared to its competition?

Well I think the other big alliance is the iTEC alliance based on the cooperation with Indra, the second big supplier in the ATM industry next to Thales, which is our partner in COOPANS. This is similar development, but it is by far not as efficient as we are. COOPANS is running the same software build in 5 countries, in 5 ANSPs and in 7 ACCs at same time. In addition to that, we are very quick in terms of implementation - usually within two weeks the new build is put into operation in all 7 ACCs. So this is unique, no one else in Europe or, as far I as I know, even in the world is able to do that. This is a great achievement and makes us very proud.

Austro Control has had the COOPANS system operational for a little over 4 years, what have been the most notable benefits?

The benefits are huge. If you look at the developments in terms of delays after the implementation in our ACC February 2013 it is an incredible performance. So this really helps Austro Control in terms of operational performance. Also in terms of safety the situation is very positive, we were able to reduce the number of safety significant events substantially over the last four years. If you look at the en-route flights we have moved from average delays of over a minute to now just 0.07 minutes. The TopSky system also helps us to meet the very challenging targets of the Single European Sky initiative. Since November 2015 we have the system operational in all units including the terminal units, this has also helped us to be as efficient as we can in terms of the cost running, as well as developing and maintaining the system together with our partners.

Last question, let’s take a look ahead: What are the next steps or goals for the COOPANS Alliance?

As I have said before, it is very important for us to keep up with our very efficient and progressive way of working together. If you look at the requirements coming from SESAR and SES, it is a big challenge for COOPANS and the industry to make sure, we meet all the targets coming from the ATM Masterplan and the pilot common projects and soon the Common Pprojects 2. This requires a lot of coordination within COOPANS but also with Thales, to make sure we are able to deliver all those functionalities over the years. And if we should grow, the next step will be to evolve the governance and structure of our alliance, more towards a company-like approach. Because today it is more of a consensus based cooperation, which has worked very well over the years. But if you grow in terms of members and tasks – COOPANS is also part of SESAR 2020 Joint Undertaking, of the A6 and of the SESAR deployment manager, which is going to develop into a single legal entity with the beginning of next year - it will become time and necessary for each partner to assume specific responsibilities on behalf of the others. Because if we all want to be part of all processes, it is going to be difficult and probably a downturn in terms of efficiency and flexibility will take place. That’s a huge challenge, as you can imagine, but I am confident it is a challenge we will be able to meet.