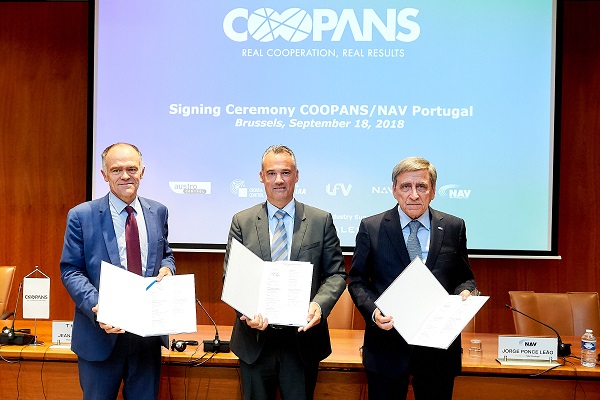 After the successful completion of the formal membership process, NAV Portugal has now officially joined the COOPANS Alliance as sixth member. For NAV Portugal this step not only represents a decision for a new ATM system, but was primarily determined by a strategical point of view.

“The strategic decision to join the COOPANS Alliance was to provide NAV Portugal with a better position to address the technological and procedural challenges posed to Air Navigation Service Providers by the Single European Sky Directives, requirements and definitions, as well as to address to the strong and unforeseen increase in traffic registered in recent years in the Lisbon Flight Information Region (FIR).  We strongly believe, that being a member of the COOPANS Alliance will have a very positive technological, operational and economic impact on NAV Portugal”, says Jorge Ponce de Leao, President of NAV Portugal.

“We are very proud and honoured to welcome NAV Portugal as the sixth member of COOPANS. Our alliance has become a role model of industrial partnership in European aviation and we have received a lot of appreciation from the airlines, from other ANSPs but also from the European Commission. Our goal has always been to grow and strengthen the alliance.  I believe with NAV Portugal we have found the perfect partner to do so and I am looking forward to many years of fruitful cooperation”, says Thomas Hoffmann COO of Austro Control and Chairman of the COOPANS Alliance Board.

The COOPANS Alliance stands as the leading example in Europe of an industrial partnership with cooperation between multiple ANSPs and a strong relationship with Thales its technology partner delivering the ATM system. With the COOPANS approach, members benefit from harmonized maintenance processes and operational concepts as well as continuous upgradings resulting in savings of about 30 % compared with a standalone model.

“Joining the COOPANS Alliance, NAV Portugal will benefit from the same unified and advanced ATM system as the 5 ANSPs, members of the COOPANS Alliance, and implemented with the same software version at seven ACCs.   NAV Portugal as the other members will also be able to handle increased traffic with enhanced operational performance and safety, minimizing costs to its customers. We are very proud that the Thales TopSky product is the system of choice for COOPANS, a very prominent group of customers in Europe, and we welcome NAV Portugal to the alliance”, says Jean-Marc Alias, VP Air Traffic Management Thales.

COOPANS is in line with the requirements of Single European Sky and helps drive forward the harmonisation of European ATM systems.