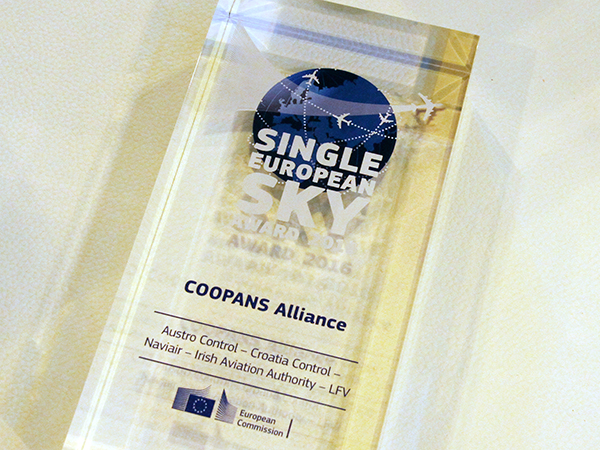 COOPANS was established in April 2006 between the IAA, LFV and Naviair, with Austro Control joining in 2010, followed by Croatia Control in 2011 with Thales as the chosen industry supplier.

The COOPANS Alliance capitalises on joint, innovative and harmonised system development between the COOPANS Alliance ANSP members. COOPANS has adopted a common managerial approach, whereby the five ANSPs act as one organisation with the same COOPANS ATM System from the supplier, Thales, with a focus on common success. This approach delivers a saving of approximately 30% of (large) capital expenditure for each member, which ultimately delivers lower costs for our airspace customers. At the same time, COOPANS has also increased airspace capacity in the region of 30% for each ANSP member.

On three separate occasions in 2015, the same COOPANS software upgrade was successfully deployed across all 7 Area Control Centres (ACCs), from the 5 ANSPs within an extremely short timescale. On each occasion this deployment was achieved with no negative impact on operations (no capacity restrictions / no delays).

COOPANS is planning for the future and to ensure compliance with the SES ATM Masterplan. Future system functionalities for COOPANS include:

Furthermore, COOPANS is working closely with DSNA, the French Air Navigation Service Provider – another Thales user. COOPANS and DSNA are jointly committed to fulfilling SESAR objectives, and the CODACAS Programme (“Convergence Of Dsna And Coopans Atm Systems”) is assessing the opportunity to commission a common build of our ATM System from 2025 onwards.

For more information on the COOPANS Alliance, learn more here at www.coopans.com