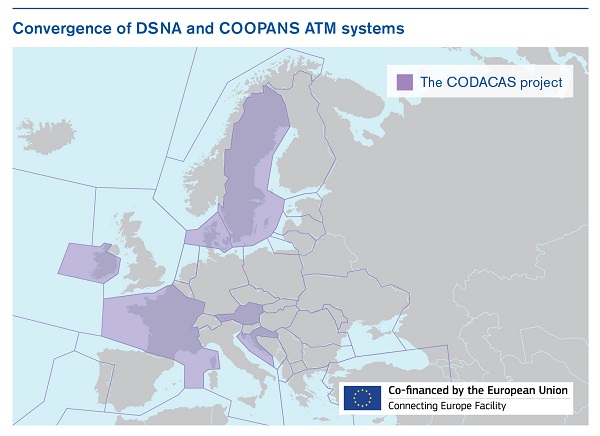 Date:
29-01-2018
Short content:
CODACAS (Convergence Of DSNA and COOPANS ATM Systems) is a partnership between COOPANS and DSNA aiming at studying the feasibility of procuring a common core of their ATM systems.
Long content:

As a result of the CODACAS-1A project, which ended in December 2015, the common core will be based on the component Coflight (the new Flight Data Processing System used by DSNA).

Since the beginning of the CODACAS-1B project in February 2016, COOPANS and DSNA experts have been performing the comparison of the functionalities offered by Coflight with the ones offered by the current COOPANS system. This comparison is carried out in parallel on paperwork and using a Coflight-based demonstrator located in DSNA premises in Toulouse. The demonstrator runs now with Austrian operational data such as airspace, letters of agreement, … allowing the COOPANS air traffic controllers to evaluate the component with a high level of reliability. Through many workshops in 2016 and 2017, the teams have constructed a mutual trust and a common point of view. On a strategic level, work is on-going to issue an implementation roadmap which would allow to meet the SESAR Implementing Rules milestones.

A seminar took place in Vienna in September 2017, gathering technical experts, project managers and CTOs. It allowed to build a common view of the work already performed and of the remaining steps required to reach the objectives.

The project is co-financed by the European Union.